Atletico Madrid beat Liverpool  3-2 at Anfield to reach the quarter-finals of the UEFA Champions league competition on Wednesday night to end Liverpool’s dream of defending the title they won last year.

Atletico headed into the second leg of this last-16 tie with a 1-0 advantage from Madrid in the first leg, but Wijnaldum’s first-half header sent the sides in level 1-1 on aggregate with 45 minutes left to play.

Atletico keeper Jan Oblak was in superb form with save after save to deny Liverpool and the game entered extra time. Brazilian striker Firmino scored four minutes into extra time to put the Reds ahead.

Marcos Llorente came in as substitute to score for Atletico following an error from goalkeeper Adrian. Llorente then struck on the stroke of half-time in extra-time to ensure Liverpool get dumped out of the competition.

Twitter users were quick to praise Atletico while Liverpool received heavy criticism for the manner of their loss. 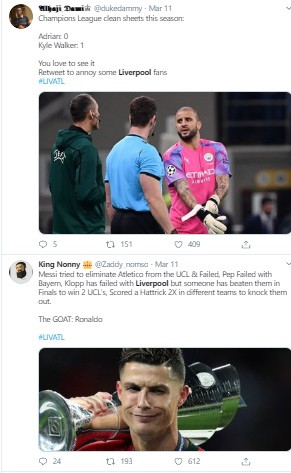