“Music to Be Murdered By: Side B” was executive produced by Eminem and Dr. Dre. The album features Skylar Grey, DJ Premier, Ty Dolla $ign, Dr. Dre, Sly Pyper, MAJ and White Gold.

Prior to the release of the album, Eminem whose real name is Marshall Bruce Mathers III had remained mum about the album in spite of rumours of a new release which began circulating on social media last week. Strengthening the speculations was a release of the purported cover art and 12-song tracklist surfaced online.

Shady Records’ KXNG Crooked responded to the rumours by sharing what seemed like a press release with a tracklist, release date and featured artists earlier in the week:

On “Zeus,” Eminem offers an apology to Rihanna. He references a decade-old song that leaked in 2019 that featured lyrics about “siding with Chris Brown.” “And wholeheartedly apologies Rihanna for that song that leaked/I’m sorry, Rih, it wasn’t meant to cause you grief/But regardless it was wrong of me.”

Stream “Music to Be Murdered By: Side B” below:

Once, releasing a “deluxe version” of an already successful album simply meant appending its contents with B-sides and live tracks in order to rejuvenate its sales, squeezing the kind of diehard fans who’ll shell out for any new release by their favourite artist. In 2020, however, hip-hop has significantly raised the bar.

Deluxe versions of previously released albums by DaBaby and Lil Baby both came with what looked like entire new albums attached; the murder of rapper Pop Smoke in February didn’t preclude his label finding 15 new tracks to add to his posthumously released debut album a month after it first came out.

Likewise, Eminem’s Music to Be Murdered By Side B features an hour of additional music to make it a fully realised piece of work. It is one that shares its parent album’s preoccupation with Alfred Hitchcock – the late director appears on the intro; the music on Alfred’s Theme is derived from Gounod’s Funeral March of a Marionette, which played while the credits rolled on the TV series Alfred Hitchcock Presents – and it reacts to its predecessor’s mixed reviews and the controversy it stirred with the track Unaccommodating, which featured queasy jokes about the Manchester Arena bombing. The latter provoked condemnation from both fans and the mayor of Manchester. Eminem’s response is a classic sorry-not-sorry: “I know nothing about the Manchester bombing is funny,” he offers on Favorite Bitch, before making a joke about the Boston marathon bombing.

There’s an argument that getting upset because Eminem has said something appalling on his new album is like getting upset because the new AC/DC album features a man dressed as a schoolboy playing guitar: it’s rather the point. In fact, AC/DC are an apposite comparison. They’ve been in the business of giving their audience precisely what they expect for decades now, which has more or less been Eminem’s default position since 2010’s Recovery. Donald Trump provided a flash of re-energised inspiration, perhaps because the “alt-right” looked not unlike a significant section of his noughties fanbase: “the angry white young misanthrope who feels marginalised … with a sense of aggrievement that is out of proportion to reality,” as his biographer Anthony Bozza put it.

Eminem’s scorn for the current state of hip-hop, which informed 2018’s Kamikaze, offered listeners the curious spectacle of Slim Shady sounding like a middle-aged dad, bemoaning the music his kids like. Other than that, it’s been business as usual.

And it’s business as usual here: it takes 52 seconds to reach the first lyrics about assaulting a woman and three minutes to reach the first about murdering her, complete with sound effects. Mumble-rap comes in for another kicking on Favorite Bitch, 90s hip-hop is hymned, there’s a jab at rappers who use ghostwriters – daring, given the guest appearance from Dr Dre, the most famous user of ghostwriters in the business. There’s the usual stuff about drugs and madness; there are jokes about Bill Cosby and Harvey Weinstein. There’s a burst of support for the Black Lives Matter movement on These Demons and Zeus (“black people saved my life,” he avers) and he keeps mentioning coronavirus, particularly on Gnat, without having much to say about it beyond comparing it to himself.

On the other hand, age has not withered the rapper’s astonishing level of technical skill. If you’ve heard most of what he says before, it’s still possible to be awestruck by the way he says it – a breathless, relentless barrage of wordplay, puns and tricky internal rhymes, delivered in a voice that builds in intensity as the tracks go on. 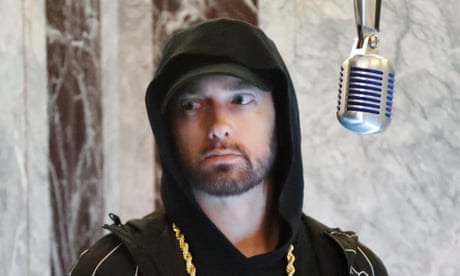 Eminem: Music to Be Murdered By review – potent force in search of targets

The music is less interesting than on its predecessor: the best thing here might be Guns Blazing’s churning bass and drums programmed to sound like a succession of shots fired, but there’s nothing to match the chaotically thrilling noise of Music to Be Murdered By’s You Gon’ Learn. Nor is there an unequivocal triumph along the lines of that album’s Darkness, a brilliant depiction of the 2017 mass shooting in Las Vegas through the eyes of its perpetrator.

The most interesting moments come when Eminem confronts his own artistic dilemma head-on, worrying about the fact that he’s nearing 50 – “I’ll be an old fart” – or protesting that people “want you to change but don’t change … want the new but old Shady”. “Where am I supposed to go from here?” he snaps on Higher. “Really I have no idea.” It feels like a touching moment of honesty and clarity. Then he snaps back into Slim Shady mode and makes another joke about his testicles.