nocomments
Tweet Share
Home
News
Coronavirus: President Trump suspends all flights to US from Europe except UK and Ireland for next 30 days (Video) 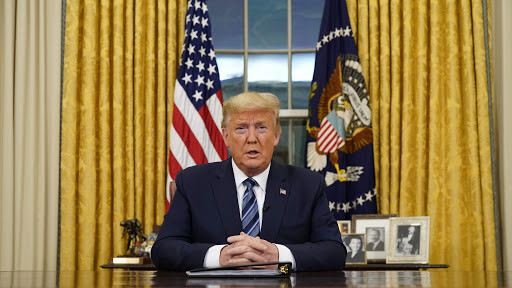 President Donald Trump has announced that he is suspending all flights to U.S from Europe except UK and Ireland for the next 30 days in a bid to reduce the spread of the coronavirus pandemic in America.

Trump made the announcement as he addressed the nation on the coronavirus outbreak from the Oval Office in the White House on Wednesday night.

According to him, the policy goes into effect on Friday at midnight.

We will be suspending all travel from Europe, except the United Kingdom, for the next 30 days. The policy goes into effect Friday at midnight. pic.twitter.com/Yeq1gVCIln

“We have seen dramatically fewer cases of the virus in the United States than are now present in Europe,” Trump said, adding that. “The European Union failed to take the same precautions and restrict travel from China and other hot spots. As a result, a large number of new clusters in the United States were seeded by travelers from Europe.”

“We are at a critical time in the fight against the virus,” Trump said. “We made a life-saving move with early action on China. Now we must take the same action with Europe. We will not delay. I will never hesitate to take any necessary steps to protect the lives, health and safety of the American people. I will always put the well-being of America first.”

The president also said that the halt on travel from Europe would not include the United Kingdom, and that there would be “exemptions for Americans who have undergone appropriate screenings.”

After Trump’s address, his administration made clear it was not as drastic as the President stated: ‘The ban will apply only to foreign nationals and not to American citizens who had been screened before entering the country, mimicking restrictions he applied to China last month.